Tom Bevan was born in Risca, Monmouthshire in 1868 the second child of Arthur and Louisa Banfield. His father was originally from Wiltshire, and his occupation recorded at various points as 'labourer', 'brick maker', and in later life as employed as a 'weigh-master' at Gloucester's Oilcake Mills (Arthur would live until he ninety eight, outliving his son Tom). Tom’s mother had been born in Paulton, Somerset where her family had roots dating back to the early seventeenth century, but when she was two years old they moved to Risca. This was where in 1865 she married Arthur Bevan. Tom's older sister, Elizabeth Maria, was born in 1866. He would be joined by four more siblings (Sarah Jane 1870, George Arthur 1874, Johnathan 1878, and Annie Louisa born in 1880). Tom and his younger brother George appear to have been named after their late uncles.  Thomas Banfield was killed aged fourteen in the Risca colliery explosion of 1846, along with brother George aged thirteen, and their father (also George). In total thirty-five men were killed in the disaster caused by ignition of ‘fire damp’ gas (Cardiff and Merthyr Guardian, 24th Jan 1846, p3d-f).

Aged eighteen Tom was enrolled at the Cheltenham Training College  (today part of the University of Gloucestershire) on the teacher training course. He had been a pupil-teacher at St James in Gloucester and had been awarded a Queen's Scholarship to attend the college. Records held in the University of Gloucestershire Special Collections give some insight into Tom's time at the college.  He played cricket and rugby, and was an active member of the Debating Society. He gave a talk on 'The Evolution of Man', and on 'Genesis'. In a debate during 1887 he spoke against the motion 'That the Channel Tunnel scheme is advisable'. He is also noted as singing a song at the Temperance Society meeting, singing being something he would continue to enjoy in later life. One of his essays was titled 'A Dissertashun on Gas and Gaas', and he notes that his friend and honorary secretary of the Debating Society Mr W. Johnson was the author of a dictionary of 'Glasstashire' dialect. This early interest in dialect would go on to inform many of the books Bevan went on to write as they display a fascination with archaic language and local dialect. Several of his later works are set in Gloucestershire - in particular the Cotswolds - and the more 'rustic' characters are given a Gloucestershire voices.     ​ 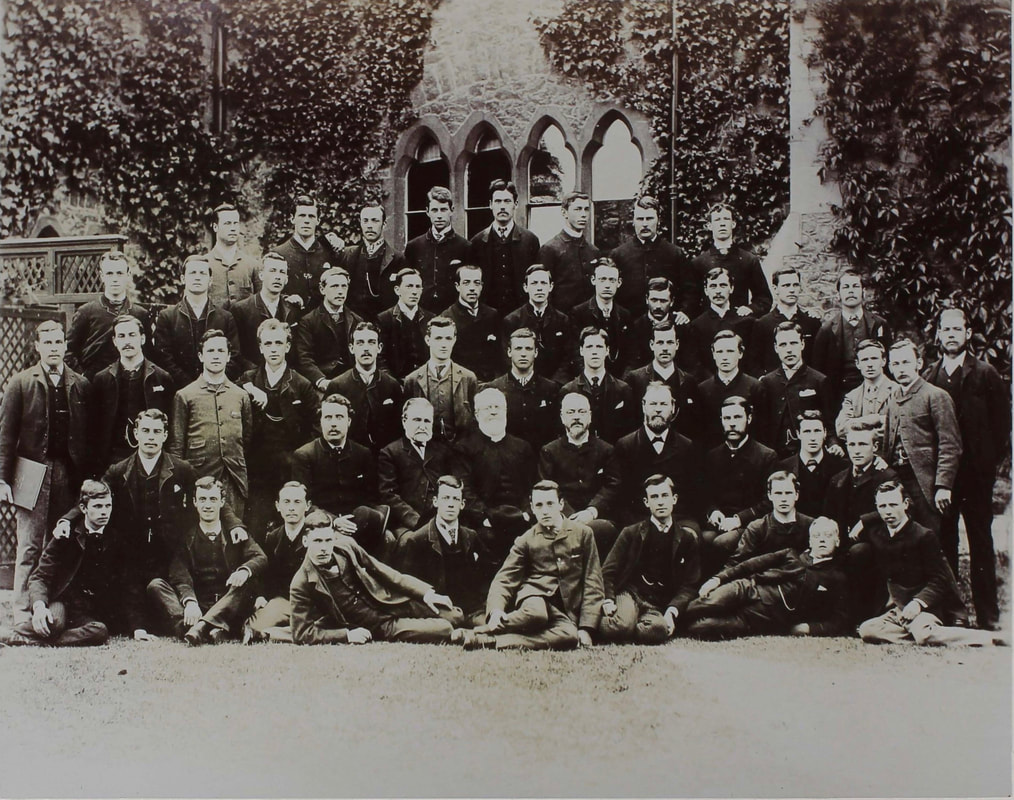 Tom's teacher-training course lasted two years after which he began work as a fully qualified teacher. In the census of 1891 he is recorded with his parents and siblings in Barton Street, Gloucester and gives his occupation as  'Assistant School Master, elementary', but by this point, in fact since 1890,  he was already teaching at the Boy's Elementary School in Rickmansworth, Hertfordshire (Tom may have been visiting at the time of the 1891 census, which was taken in April. He is recorded just a few weeks later, on May 18th, as a witness at his sister Elizabeth's wedding at St James' church, Gloucester). Tom's teaching career at Rickmansworth was a success and he would go on to become Headmaster at the school, staying there for the remainder of his teaching career. One of the perks of his new job was the Schoolhouse, provided rent free, where he lived from 1894 to 1900. The house eventually proved too small for his growing family and by 1901 Tom Bevan and his family had moved to Brooklyn Lodge, Nightingale Road, Rickmansworth. At the same time he arranged with the school managers for a tenant to move in to the Schoolhouse with the rent paid to himself. The tenant, Mr Mann, a fellow teacher at the school, was still there in 1932, four years after he had retired. Bevan, also retired by this point, was called as a witness in the resulting court case as the managers sought Mann's eviction (The Advertiser and Gazette, 4th March 1932, p9d).  Tom's status as school headmaster meant he was a person of some standing in the local community, and he and his wife became actively involved in the life of Rickmansworth.
Tom was one of the organisers for the Penny Reading Society in the town. There were similar societies all over the country, and they are thought to have originated as a source of edifying and educational entertainment for the working-classes consisting of readings, music and performances - a penny being charged for admission. Tom is often noted as  having written 'the prologue' for several of the Rickmansworth evenings, but he also sang and gave readings at them. Tom was a member of the town Cricket Club and was singing again at a fundraising event for them  (a 'Smoking Concert') in 1902, his choice of songs this time being 'She wore a wreath', and 'Pretty Jane' (The Advertiser and Times, 13th December 1902, p7h). He was appointed Honorary Secretary to the club in 1900, and amongst other things he researched the history of the club, discovering for example, that they had played a team at Lords Cricket Ground as early as 1807. His interest and expertise in history, including the local history of Rickmansworth, saw him regularly giving talks in the town, and he contributed papers to the St Albans and Hertfordshire Architectural and Historical Society. When bones were discovered locally in the course of gravel digging it was Tom who was called upon to give details on the Stone Age settlements in the area (The Advertiser and Gazette, 1st February 1924, p2c). He was a member of the town council (not to be confused with Tom W. Bevan who was also on the council, seemingly no relation), and an active member of the local branch of the National Union of Teachers.

Kate Bevan was also involved in the musical life of the town too, and is noted as having given piano accompaniment to a performance of 'Indian club drill' by boys at the school concert (Middlesex and Buckinghamshire Advertiser, 8th December 1900, p6e). She supported the work of the local Boys Brigade, attended a meeting of the NSPCC in 1902, and was instrumental in the formation of the Rickmansworth Parsonage Tennis Club (the inaugural meeting being held at the Boys School in 1902). ​

Tom Bevan finally retired from teaching in 1929, but sadly his wife Kate passed away in the Rickmansworth area in 1931. In the Cheltenham Training College alumni magazine 'The Directory' for 1932-33, Tom reports that he has now settled in the New Forest, perhaps this was to be near his daughter (and fellow author) Kathleen who was married in the area a few years later. He had given up his editorial role at the publishers but reports that he 'retains an interest in the firm'. Tom mentions that he has completed a novel, and (intriguingly) a three-act play that he mentions again the following year. In the 1935-6 edition of the magazine he reports that he's in excellent health, but thinking of leaving the New Forest for either London or Cheltenham. The following year he had left, and says he is 'experimenting to find a suitable place for settling down' and that he 'thinks it will be Cheltenham'. He did finally move back to Cheltenham for this was where, on 9th November 1937, he died. His landlady said that he had retired as usual the night before, but on taking him a cup of tea the next morning she found him in bed dead: presumably he had died in his sleep (Cheltenham Chronicle and Gloucestershire Graphic, 13th November 1937, p3c).
Copyright © 2016