Robert John Mansfield was born on 17th July 1905 to George John Mansfield and Cleopatra (nee James). George, his father, was born in the West Dean area in 1870 and was one of a large family. His father (Robert's grandfather) was a coal miner, work that George and his brothers were also involved in for at least part of their lives. George married Cleopatra James in March 1895 and by 1901 the couple were living in Newland, George's job at this time being a Corn Miller's Clerk.  By the time of Robert’s baptism in 1907 his family had moved into Coleford, living for a time at The Waverley before settling into a new home, at Sunny Bank, Sparrow Hill, Coleford (where Robert's parents would live for the rest of their lives). In 1904 George was appointed to succeed a Mr W. Morris as carting agent of the Great Western and Midland Companies (Joint) Severn and Wye Railway, for Coleford and Lydbrook. The report notes that ‘Mr Mansfield was for ten years a stationmaster on the joint railway’ though available census records cannot confirm this. George became heavily involved in town affairs, serving in a number of capacities including being the honourable secretary of the Coleford Traders (Gloucester Citizen, 15th Feb 1923, p5), the chairman of the Coleford Urban District Council (Cheltenham Chronicle, 3rd Sept 1927, p5), chair of Finance Committee, and the Chair of the Coleford and District General Hospital Committee (Gloucester Citizen, 18th July 1931, p6). He was also a member of the Coleford branch of magistrates (Gloucester Journal, 27th Feb 1926, p6). Robert's mother was baptised in 1871 at Parkend. She was the daughter of a butcher.

Robert grew up in Coleford and was educated at local schools, including Bell’s Grammar School. A report at the time of his marriage suggests he may also have attended Monmouth School. As a schoolboy, aged around 14 years, Robert appears on one occasion to have possibly faced a fine to the sum of 4s costs for riding a motor cycle with ‘obscured identification plates’ (Gloucester Journal, 27th August 1921, p7). On leaving school Robert worked for a time in the motor and transport trades. A report of his wedding notes that as a young man Robert ‘played rugby at school and hockey for Coleford’. Robert subsequently entered Kings College, London, studying for holy orders, and showing early interest in activities which were to remain important to him throughout his life, including amateur dramatics. Whilst at university Robert became friends with A. M. Beer, who was then the president of the Union Society of King’s College. Beer acted as best man at Robert’s wedding.

Robert was married in St Briavels on 29th August 1934 to Sybil Ida Creswick, then aged 29 years old. Sybil was born on 3rd March 1905 the daughter of George Philip Creswick, a boot-maker of St Briavels. Prior to her marriage Sybil had attended Birmingham University, where she also gained a blue for hockey.The wedding ceremony was conducted by Edward H. Brice, vicar of Birdwood, assisted by Rev. S. H. A. Bennet, of St Briavels. The subsequent reception was held at the Assembly Rooms in St Briavels.  A newspaper account of the marriage notes that the bride wore ‘parchment bridal satin’ and a family heirloom: a Valenciennes lace veil (Gloucester Journal, 1st Sept 1934 page 8). Robert was ordained in 1934, a few months after his marriage.

Some of the key events in Robert's Ministry
1934: Appointed as curate of St Peter’s Cheltenham. His first service was assisting the vicar at the Harvest festival there (Cheltenham Chronicle and Gloucester Graphic, Oct 6th 1934)

1945: Addressed service at Newland. Robert was referred to as a former pupil at Bell’s Grammar School, which was celebrating its 500th anniversary. (Gloucester Citizen, 10th Dec 1945, p4)

1950: Interviewed in a radio broadcast on the West Regional Children’s Hour’ programme. Robert talked about the bells, which were also recorded and broadcast (Gloucester Journal, 29th April 1950).

1950: Robert organised a World Vision travelling exhibition tour on behalf of Gloucester Diocese, with the aim of demonstrating what the church was doing ‘in many lands’. The tour was to visit numerous rural locations across the County, including some in and around the Forest of Dean (Coleford, Cinderford, Newnham and Newent). (Gloucester Citizen, 19th Sept 1950, p8)

1967: Robert organised an exhibition at St Barnabas Church, Gloucester, attended by over 5,000 people, aimed at encouraging them to mix with others from different parishes.

In 1948 Robert was appointed to the founding committee of the newly formed Forest of Dean Local History Society, which aimed to cover the area between the Severn and the Wye. Others appointed to the committee at that time were Mr I. L. Durham of Newland (secretary, who on demobilisation at the end of WW2 was also made the University of Bristol’s Resident tutor in West Gloucestershire), and Messrs A. J. Machen, S. D. Morgan, C. Hart, V. G. Hudson and T. Bright (Dean Forest Guardian, 16th Apr 1948). Viscount Bledisloe was made the first president of the Society, which soon had a solid membership, of around 60 people. On the Viscount’s death in 1952 he was succeeded in this capacity by Dr Charles Scott-Garrett. In late 1949 Robert was appointed Chair of the LHS, being succeeded in 1952 by Mr Tom Bright.

​Robert remained an active committee member in the 1950s, and throughout this time he gave many talks and presentations on local history:

1948: Tutor for a course organised by the Gloucester Branch of the Workers Educational Association, entitled ‘How we are Governed’ (Gloucester Citizen, 9th Sept 1948, p7)

1950: Talk to Aylburton W. I. on the occasion of their 30th birthday, on the theme of ‘old and historic buildings in Gloucestershire’ (Gloucester Citizen, 18th Sept 1950, p7)

1950: Talk to the Local History Society, on a picture of life in Newnham in around 1800. His talk included a section on apprenticeships e.g. an indenture of Hester Meredith to study ‘good housewifery’ until aged 18 years. This was rejected as the person to whom she was to be indentured was an unmarried male! (Gloucester Journal, 16th Dec 1950, p6)

1962: Edited a reprint of Mabel K. Wood’s book ‘Newnham on Severn, A Retrospect’ at the request of her sister Charlotte.

1965: The Newsletter of the Gloucestershire Society for Industrial Archaeology (No 5 July 1965) describes a talk given by Rev Mansfield, taking in aspects of the history of Newnham, including the glassworks, the former ferry crossing, an early planned tunnel across the river and shipping activities at Bullo Pill  (www.gsia.ork.uk/reprints/news/ginl05.pdf ). 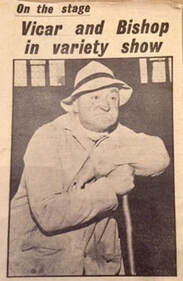 Robert showed a keen interest in amateur drama, something he had developed whilst at Kings College. The Forest of Dean had a well-developed amateur drama scene with a number of groups active across the Forest and often taking part in county-wide competitions. In 1950 Robert performed with The Forest Shakespeare Players in their production of ‘The Merry Wives of Windsor’, playing Sir John Falstaff, alongside Herbert Howells as Sir Hugh Evans. (Gloucester Citizen, 23rd May 1950, p5). He had a long involvement with productions performed by the Lydney Grammar School Operatic Society, from the late 40s to the late 50s (www.sungreen.co.uk/Lydney/LGS_Book/MusicPowell.htm) including in 1949 taking the role of Don Alhambra in ‘The Gondoliers’. In 1950 he performed in two Gilbert and Sullivan Operettas, ‘The Pirates of Penzance’ and  ‘The Mikado’. He took the roles of the Sergeant of Police in the former and Pooh Bah in the latter (Gloucester Journal, 2nd Dec 1950 / Gloucester Citizen, 7th Dec 1950). In 1951 The Society performed ‘Merrie England’ in recognition of the Festival of Britain and Robert assisted Keith Powell-Davies in the production. There was a cast of 21 main characters and 33 in the chorus. In 1953 Robert co-wrote an operetta with Powell-Davies entitled ‘The Phantom of Delight’ and was performed with a single set, in modern dress.  1957 saw  the final Powell-Davies production which was 'lolanthe' in which Robert again performed. in this production. Robert also rote words for an operetta entitled ‘My Lady Cavalier’. It was set during the english Civil War and was based on the history of the Wintour family of Whitecross House. Music composed by Keith Powell Davies. The date of this production is not known but a picture can be seen here www.sungreen.co.uk/Lydney-LGS/my_lady_cavalier.html

Sources
Online and newspaper sources as cited in the text.
Many thanks to the Forest of Dean Local History Society for making available the following two papers:
Many thanks to Caroline Prosser-Lodge for her research and writing on this page.
Copyright © 2016