Maureen Davies was born on 1st May 1947, the second of four children, with an older sister Ann (born in 1943), and two younger brothers, Glyn (born 1949) and John (born 1955). Her father, Trevor had married Joan Prosser in 1942. Joan is a granddaughter of Walter Prosser, who was for many years a water bailiff on the River Severn. Trevor saw active service during World War 2 in Iceland. Like other war time babies, Maureen's sister Ann recalls being shown photos of her father in his absence, to help her have a sense of who he was. Maureen was the first child to be born to the couple after Trevor’s return from the war. Maureen and her father had a particularly close bond, with a shared interest in gardening. Maureen was usually known as Mo.

All four Davies children attended Lydney Grammar School, being admitted to Thomas House, one of four school houses each named for a local dignitary (the other houses being Marling, Bathurst and Price). Mo was clearly a creative teenager, with a sample of her art work being exhibited within the Grammar School section of Lydney Art School Exhibition in 1962. The scraperboard image, (reproduced here) was also published in the school magazine that same year.

marriage & return to the Forest

​In 1983, whilst living in Somerset, Mo married a Canadian man named Bob. The marriage took place at Tiverton Registry Office in Devon. At around this time Mo changed her surname, by deed poll, to Day. Her sister comments that she did this as she had never liked the name Davies. The couple moved to the Forest, Mo buying a house in Little Drybrook. She opened a health food shop in Ross-on-Wye, with the plan for her to continue writing careers booklets whilst her husband ran the business. Sadly the marriage foundered, with her husband returning to Canada (and subsequently they divorced).  Mo decided to sell the business as a going concern. Sometime later Mo relocated to a rented property once again within the Lydney Park Estate on the outskirts of Lydney, and within walking distance of her widowed mother’s house (Mo remaining there until her death in 2008). Apart from Mo’s time away at university and two periods living and working in Somerset she spent her childhood and majority of her adult life in and around the Forest of Dean.

Mo wrote under the pen name of Joanna Trevor, the Christian name being a modification of her mother’s name (Joan) and the surname being her father’s name (Trevor). Her first published book A Gathering of Dust, appeared in 1994. She was a close friend of another already published forest based author (Louise Lawrence) who offered her encouragement in her writing and practical guidance in getting her works published. Mo went on to have six works published between 1994 and 2005, all in the detective fiction genre, with the central character being DCI Simon. Although not located overtly in the Forest of Dean or Severnside, there are clear influences within several of the books of the area in which Mo grew up and lived most of her life. Ann reflects that, though set in and around the imaginary town of Westwich, the landscape described by the author frequently has resonance with the Forest and lower Severn Valley.

At least some of the books take historical local events as a starting point for story development. This is most conspicuous within her first novel A Gathering of Dust, which took its inspiration from a real life suspicious death in the Forest and subsequent murder trial of a local woman. The death of quarryman Harry Pace, aged 36 years, occurred in 1928. He and his wife Beatrice Annie Pace and their family lived near Fetter Hill, Coleford.  The case attracted a lot of interest nationally, with a general public belief in the wife being innocent of poisoning her husband with arsenic. Evidence showed Harry to have been physically and psychologically violent. At the end of the trial Beatrice was found not guilty as a minimum standard of proof against her had not been established.
An account of this true story has recently been written by John Carter Wood (The Most Remarkable Woman in England – Poison, Celebrity and the Trials of Beatrice Pace (2013) published by Manchester University Press). Growing up as a child in the area less than 30 years after the murder took place, young Mo would have had some knowledge of these events.

Several of her books carry dedications to her mother, her sister and her friend Liz Holden (the real name of author Louise Lawrence). Ann reflects however that Mo did not tend to discuss her novels with family or friends as she was writing them. She never said where the inspiration for characters came from, and did not discuss her preparatory research.  When Mo passed away in 2008 she was working on a seventh novel. This remains an unpublished and incomplete manuscript. No one other than Mo knew the direction the story would have taken, nor who the guilty party would have turned out to be. A very small part of this manuscript did however in fact make it into print, in a collection of works by local authors published through the Dean Writers’ Circle,  Forest Leaves Book 4: Blue Funk, Lydney (2008). 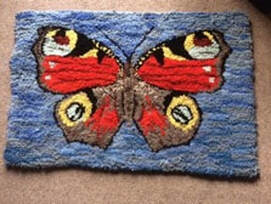 . One of Mo’s main passions was gardening, an interest perhaps inherited from, and certainly shared with, her father. Once her father retired Mo and he also used to share a cottage garden. Mo tended to use the Latin names for plants, rather than the more common names used by others in her family, and once settled in her final home in Lydney Mo’s gardening expertise extended to the development of a Japanese inspired garden. She also grew many of her own vegetables.
Mo enjoyed rag rugging, and was a skilled practitioner, making items for herself and her family. Some members of her family, including a GP cousin living in Yorkshire, commissioned Mo to make rugs for them. On one occasion Mo took samples of her work to The Conran Shop in London. They very much liked her work and would have sold her rugs, but required her to make them in greater quantities than was viable. (Picture above of one of Mo’s family pieces  by kind permission of her sister Ann).
Mo continued her early interest in art, mainly reproducing sections of favourite famous paintings. ​Mo had no children of her own but was very close to her nephews, Ann’s sons, Antony and Matt. They would stay with her mother Joan on visits, but be entertained by Mo. She encouraged them to draw, having some of their artwork framed to put on the walls of her house. Mo also encouraged them to take part in nature activities.

Research and writing of this page by Caroline Prosser.
The majority of the information in this review is based on an interview with the author’s older sister Ann, to whom thanks are given for her input and also for provision of certain of the photos and other visual materials. Unless otherwise indicated photos are provided by Ann and her family.
Copyright © 2016