Arthur Percival Keen, known as 'Percy', was born on 4th May 1875 in the parish of Newland, near Coleford. At the time the parish included the  settlement of Elwood where Percy was  born. He grew up in a cottage in the village  (happily still standing). His father Silvester is recorded at Arthur's babtism in 1880 as a quarryman, and a year later in the 1881 census as 'farmer and quarryman'.  Arthur's father was born in Godney, Somerset, a rural village near Glastonbury.  Arthur's mother, Sarah, was born in Bristol. Arthur was to be one of five brothers (Maurice b.1877, Albert b.1879, Hamilton b.1880, and Wilfred b.1882). Arthur would have attended the newly opened (in 1877/8) Ellwood School. 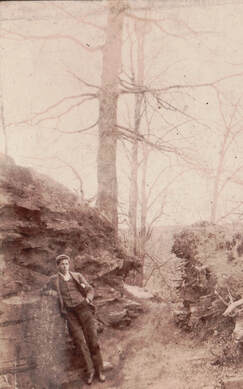 The family home at Ellwood featured a small drift mine at the bottom of the garden (remembered by Arthur's daughter) and the remains of the mine are still visible today. A photograph of Arthur as a young man may have been taken near the mine or at a local quarry - perhaps the one his father worked.

​By around 1882 the family had moved to Pilning, Redwick, in South Gloucestershire where Arthur's brother Wilfred was born. Arthur's father is understood to he had been working on the building of the near by Severn Railway Tunnel which was opened in 1885. In the 1891 census Silvester is recorded as a builder, Arthur as a 'Baker's Apprentice'. There is a family recollection of Arthur saying that he had to leave home to 'make his own way' and to do so, he sought a reliable means of income - hence the wish to become a baker. He worked out that everybody needed bread, so bread it would be!

In 1900 Arthur married Annie Turner at the Baptist Tabernacle, Derby Street in Burton on Trent, Staffordshire. In the following year they are recorded as living in the town, with Arthur now not only a baker but also an 'employer'. In March of 1901 they had a daughter Hilda, and the following year their second Clarice.  Sadly just two years later, in 1904 Annie died. By this point it seems the family had moved back to the South West, Annie's death being recorded at Bristol, and her burial at Pilning.

In 1906 Arthur remarried. Florence Gertrude Jarman had been born in Birmingham but by 1901 was living in Bristol running her own small boarding school for girls on Wells Road in the Knowle district of the city. The Keen family recall that this is where Arthur, as a widow, had sent his daughters to school and that being how the couple met. Arthur and Florence married at the Wells Road Baptist chapel in June 1906, and they would go on to have four sons and two daughters together.

In 1911 Arthur is recorded as baker, confectioner, and an employer. The Keen bakery business was certainly becoming a success and the family doing well, such that in June 1928 at Southampton, Arthur and Florence boarded the S.S .Montroyal setting sail for Canada to visit Florence's brother in Calgary. ​

By the 1930’s Keen’s Bakery was a thriving business, with an industrial baking premises on Wells Road, in Bristol together with a string of shops and cafes across the city.  We must assume that experiences in his formative years reached down over his long life, and were reflected in his commitment to hard work and service to the community, as much as in the fictional characters about whom he wrote. Such was his standing in the bakery trade that he was also for some time chairman of the Master Bakers Association. 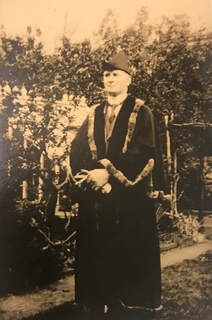 Family letters from the early nineteenth century, which still survive, fired Arthur's imagination such that they inspired him to begin writing a novel. He began to draw on the letters and through his characters, he addressed poverty and injustice from a point of view which might be seen as well ahead of his time. His two novels focus on social issues which he would have observed as a youngster in the Forest, and confronted later in life, when he served as an Alderman on Bristol City Council, and also on the Board of Guardians (for 41 years) which assisted those facing hardship and destitution. His civic work in the city was much appreciated, with one correspondent to the Bristol Evening Post following the announcement of his death in 1958 writing: 'I feel that the great service he did as a member of the old Board of Guardians should not be overlooked [...] his kindliness and sympathy with applicants for relief under the Poor Law [...] Southmead Hospital was built under direction fo the board. The Maternity Ward mainly used by unmarried mothers and destitute women..' He was active in many other charities, particularly the Bristol  Y.M.C.A.
​His first novel, “Eliza” was published in 1955. 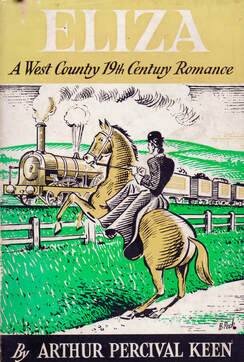 In a letter written to his daughter in March 1955, Arthur describes how he 'mired up' fact and fiction.  His idea for a character to be killed in a riding accident came from a family member who was actually killed by a falling tree. Another forebear was known to have worked on the construction of the Severn railway tunnel, but '….the idea of marrying him to my mother is all fiction'……  'as you know, the history of those relatives is shrouded in mystery, and I imagined it from some old letters of my grandmothers'.  There is a sense of a skeleton in the cupboard, but tantalisingly, the cupboard door remains firmly closed, as far as the author and his descendants are concerned.

Eliza, the heroine, is an unmarried mother, and a letter still exists in which the writer asks a relative in Australia to take in his sister and child, passing them off as widow and son. It is all credit to the author, that his fictional heroine wins through in the end, without having to run off to the antipodes to hide her shame! Unfortunately, there is no clear record as to exactly which relative penned that letter, which so obviously fired Arthur’s imagination.
Eliza, set in Bristol, and described as a 'West Country 19th Century Romance', was self-published by the Burleigh Press. Their premises at the time was round the corner in Bristol from one of the Keen’s business premises, so probably the two businessmen knew one another.  At aged eighty, one might be forgiven for self-publishing, with 'time’s winged chariot hurrying near'! 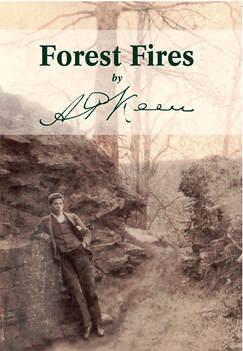 Time, sadly, did run out for Arthur before he could publish his second novel. A strange chain of coincidences has led to it finally getting into print in 2021, which his grand daughter June explains in the foreword.  Following her mother’s death in 2013, June found the manuscript wrapped up in brown paper and string, at the back of a desk, where it had lain since 1958.  According to her mother, the book had 'never been finished'.  Perhaps Arthur meant that it was unfinished in the sense of it being un-edited . Either way, he died before anyone thought to ask, but his grand daughter read it, found it to be a completed story, and thoroughly enjoyed it.  She undertook a bit of 'amateur tweaking', and decided, like her grandfather, to self-publish. June says: 'In my seventies, I didn’t want it to be lying in the back of a desk for my grand daughter to discover in another seventy years!'
A chance gift of the book Forest Fact and Fantasy by Forest of Dean Writers as a Christmas present in 2020, and, finally, the pandemic  gave June all the encouragement and time needed to go from string paper parcel to printed book, (courtesy of print & design company Graphics Shack in Lydney).

TRUE LIFE REFLECTED IN FOREST FIRES
As in Eliza, fact and fiction are all 'mired together', although, sadly, due to Arthur's demise, no letters were sent to say exactly what real life influences sparked the author’s imagination.  Fortunately, his grand daughter has some of the answers! She recalls him telling her of a snowy night in the Forest, when, as a frightened young boy, his horse and cart led him safely home in the dark…..as described when his character, Joseph, is caught in a snowstorm.  Arthur's first wife died young of appendicitis, as does Sally’s first husband, when pain struck him down while playing cricket. Like another character in the novel, the author was left widowed with two young daughters (he augments these to three, in Hester’s case, who become the basis of her little school.) In real life,  Arthur was fortunate to find love for a second time, as did Sally. Even better, in real life, the author found love with the owner of the private school where he boarded out his little girls -  “Reader – I married her!”  Apparently, with marriage, the school became surplus to requirements, and it was its sale which enabled the purchase of the Keen's bakery.
Arthur's grand daughter adds, don’t let this sound as if business came before romance, as it often did in former times, out of necessity. Far from it! Letters from the author following publication of Eliza, include some delightful references to the romantic element in his first novel. To modern readers, the treatment of sex, (if “sex” can be referred to as the holding of hands, or a fleeting glance), seems way off the mark, but his grand daughter says that Arthur was definitely a romantic!  June says, 'A look at the cover pic. shows him to be a handsome guy, and he did father eight children!'
Many thanks to June Howell for the research, writing and images on this page.
Also with grateful acknowledgement to June's sister Rowan Reynolds for the Hurford family tree shared via Ancestry.co.uk
Copyright © 2016